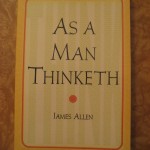 As a Man Thinketh…As a Man Speaketh…

Most readers have heard of or read the classic book “As a Man Thinketh” by James Allen. You know the moral: “What we think about we bring about…” etc. Well, I just read the most interesting article by Barrie Davenport at her site Live Bold and Bloom, about “How Words Can Change Your Life.” This article goes into this topic on a little bit different slant, and talks about the power of  the spoken word. I really encourage you to read the article.

In the article, Barrie discusses “neuroplasticity,” which is “describes the ability of the brain to change and adapt in response to stimuli, cognitive demands, and new learning. As a result, the brain can create new neural pathways and connections.” She explains that when someone who has suffered a stroke for example, and needs to re-learn how to move an arm or leg, “plasticity” can help different parts of the brain take over functions that were previously handled by the area of the brain that was affected by the stroke.

This really intrigued me, because as of this writing, my own dad suffered a stroke a few weeks ago and needs to relearn how to form letters and sounds so that he can speak again. When I saw him, his frustration level was pretty high, because he KNOWS what he wants to say, but just cannot get the words out. I encouraged him in the “As a Man Thinketh” way, and to SEE or FEEL himself speaking clearly again. Of course, it was so soon after the stroke happened, and he had barely begun his speech therapy. But, because I know he is aware of the power of thought, I’m optimistic of his ability to speak again.

Now, in Barrie’s article, she talks about neuroplasticity in terms of making positive changes in our lives by changing the way our brains may have been previously programmed to think. She refers to the popular quote by Ira Glassen who said, “Be careful of your thoughts; they may become words at any moment.” And, of course most of us have also often heard, “Be careful of your words; they become actions…” etc.

It is so critical that we keep our thoughts on a positive tract, because if we do not, we are encouraging ourselves to live a life that we say we do not want. Again, I suggest you read her entire article here => “How Your Words Can Change Your Life” – and what I commented (copied below) will make a lot more sense to you!

I responded to the article with the following idea that I actually do use in my own life (but I never knew the term “neuroplasticity” until now!).

There are times in everyone’s life where we may be feeling less than positive – maybe we are facing financial difficulty, or something has happened and we feel compelled to complain. In times like this – if we can’t seem to “snap out of it” it can help to have pre-prepared a few highly charged and positive statements on a 3×5 card. This way, if we’re having a set-back or “moment” and cannot think quickly enough to bring ourselves back to a more positive state, we have a quick reference to help us.

Actually – it might not be a bad idea to have prepared a FEW of these cards – and have them conveniently within reach, and ready to grab and read from when we need to switch our brains into the positive mode.

Ok, for example, let’s say I’m having a morning where I’m concerned about finances. It might initially be difficult to suddenly switch the brain to say positive gratitude statements without a little “nudge.” So, when I’m aware that I’m having the concern, I can grab my 3×5 card – which I’ll keep right at the computer and read my pre-prepared statements right then and there.

The statements may be as simple as some of the simple things we can be thankful for: “I AM so grateful for the fact that I have this computer where I can work…” or “I AM so grateful that I have ideas that I can put into action this very day to bring me closer to my goals.” Of course, the cards can have some of our affirmations as well to help us get back on track.

I would love to know your own ideas about ways you get yourself on track with positive thoughts and words!