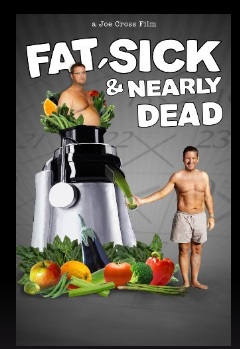 Even though we don’t have TV at our house (at least in the summer house), we do enjoy watching movies on occasion. I just watched a movie yesterday that actually made me cry – it wasn’t a movie with a plot, it was just a documentary about a filmmaker from Australia named Joe Cross who recorded his struggle over being “fat, sick and nearly dead” (hence the name of the film).

He begins his journey weighing in at well over 300 pounds, and coping with an autoimmune condition called Uticaria, which is a nasty condition that manifests in itchy and/or painful hives. As part of his treatment for this condition, he is on the medication called Prednisone, which I believe is a steroid of some sort. Whatever it is, it’s not a pleasant medication (I know because I had to take it a long time ago while “they” were trying to figure out what my skin was reacting to at the time… Turned out I was allergic to a few active ingredients in many sunscreens.).

So, Joe decides to move to a plant-based diet, but starts off with a 60-day juice fast (a lot of people who recommend juicing prefer to call them “juice feasts”). During this journey, Joe travels to the US, and hits the road talking with people about fasting and juicing. The reactions are varied as there are people in this country!

Along the way, he runs into a truckdriver named Phil Staples who suffers from the same disorder (Uticaria) as Joe, and is also morbidly overweight (turns out he tips the scale at about 429 pounds).

I won’t ruin the whole story for you – it is definitely worth watching! Suffice it to say that Phil becomes a major part of the movie, and you will be cheering him on while you watch. You can probably find it online – I don’t know if Netflix has it or not – but if you can’t find it on line, you can easily grab it here at Amazon for an instant download: Fat, Sick and Nearly Dead or if you want the actual DVD, they are also readily availabe at Amazon as well: Fat Sick and Nearly Dead on DVD

Anyway, I will be writing a bit more often, I think, on the healthy living tips topic. I’m becoming almost obsessed with it. So please stay tuned!