Worst Telemarketing Call in a While! 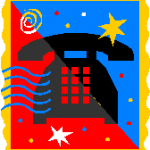 How NOT to act on the phone

Ok… So this is just a LITTLE off topic regarding personal development. But not THAT far off topic. Actually, now that I think about it, this will really be a good post under the Marketing category. Because as anyone who works in marketing will agree, there is plenty of room for self development!

Now, first let me say that I do NOT have a problem with telemarketers. It’s a job, and someone is doing that job. I understand and appreciate that.

(Uh… by the way – please do NOT take that as an invitation to call me and market to me! Really… I get enough calls as it is, even though I’m on the “Do Not Call” list.) 🙂

So, anyway, since it was John’s phone that was ringing, he picked up and said Hello. The person on the other end asked for me (using my full name, which no one who actually knows me ever does). John merely asked, “May I tell her who’s calling?”

To which the guy on the other end spat out, “I’ll call her when she’s not being censored!”

First of all, what is he talking about regarding me being “censored!?” There is absolutely nothing wrong with somone asking who is calling.

Second of all, the guy’s angry tone toward John didn’t exactly warm me up to want to speak with him for ANY reason whatsoever!

TeleMarketing people take note: This is no way to win friends and influence people (unless you really do want to influence them in a negative way enough times so that you’ll lose your job and have something to be angry about).

What if the caller actually had a product that may have been of interest to me? He wouldn’t stand a chance of ever selling it to me now. All he had to do to increase his odds of my accepting his call would have been to:
1) Identify his phone number, and
2) Give us his name and the company he was representing.

Consider, also, the negative energy that the caller was putting out over the ether. Honestly, what kind of results was he attracting to himself?
I really found the whole episode amazing. And the fact that he has called and spoken like this before is even more amazing!