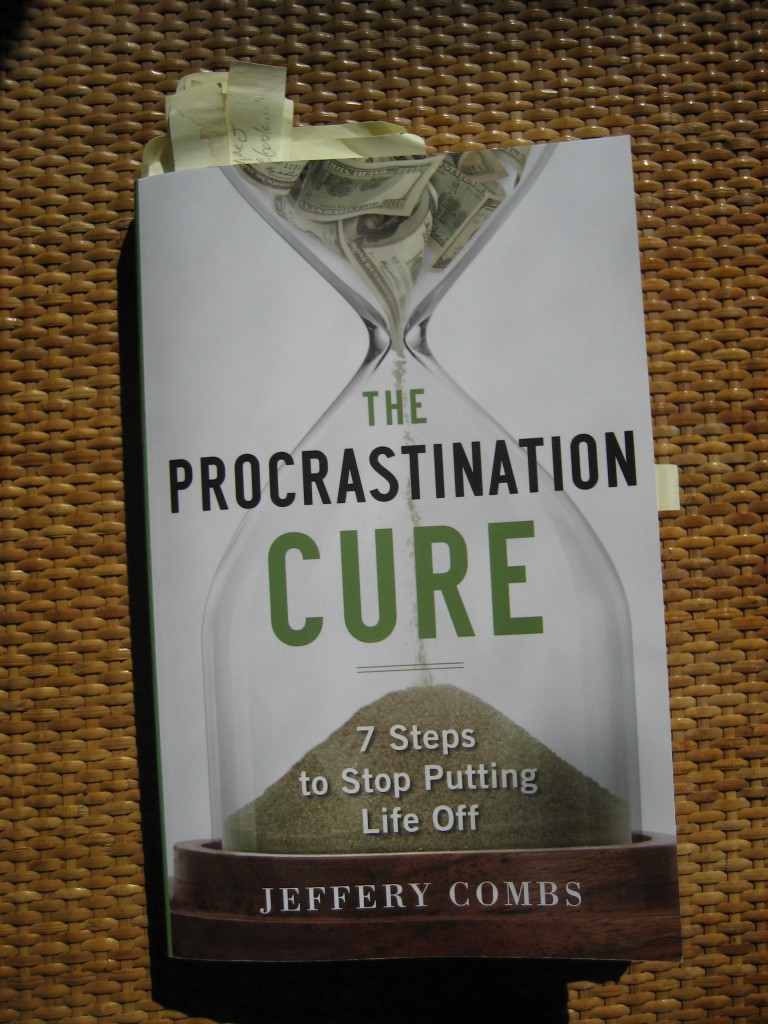 Procrastination is no laughing matter.

I was recently given a copy of the book by Jeffery Combs called The Procrastination Cure, 7 Steps to Stop Putting Life Off. (You can read my original  introduction to this book in my post here.) Now this may be time to make that little well-known joke that “I would have read it sooner but I kept putting it off.”

But procrastination is not a joke.

This is a topic that I felt well-suited for the Entrepreneurial Strategies section of this website, since entrepreneurs, by our very nature, need to be self-regulating, self-motivated, and able to work without supervision.

If we were to procrastinate on the job where a boss is monitoring our progress, that boss is certainly going to call us on it. We’ll be told to get on task and produce… or else.

So, making sure that we do not self-sabotage through procrastination is critical to our success as entrepreneurs. Hence, an excellent entrepreneurial strategy is to nip procrastination in the bud, before we allow it to ruin our efforts, our business ventures. What a terrible thing it would be to have to fire ourselves!

My Own Background and Relationship with Procrastination

Over the years, my dad and I have had a lot of jokes about procrastination, especially since it appears that I inherited some of that trait from him. When I visit my dad, a lot of times we’ll talk about piles of paper in the living room or dining room, and he’ll laugh and joke and say “Why put off today what we can put off tomorrow.”

My husband, John is always telling me that I need to watch my own propensity to collect piles of paper. And it’s true. I do have piles of paper. I’ve gotten a little bit better in the last couple of years because I’m keenly aware of the hidden costs of procrastination:

In fact, in the book The Procrastination Cure – 7 Steps to Stop Putting Life Off, Jeffery Combs discusses such hidden costs. In one example, he talks about how he procrastinated for years regarding a visit to the dentist. When he finally went to the dentist he needed about $5000 worth of work done.

There are other, perhaps more intangible costs of procrastination. In my own case, I distinctly recall some years ago saying to myself, “I really need to visit so-and-so.” I kept thinking about it, I told myself several times that I needed to visit so-and-so, and then one day I read in the paper that this particular person had passed away. The cost? An overwhelming feeling of guilt and sadness.

Had I not procrastinated about visiting this person, by the time she passed away, I know I would have felt saddened by her passing but at least I wouldn’t have felt the guilt of neglecting the friendship to begin with.

First, A Word About Jeff Combs

Jeff is certainly no stranger to the struggles that so many face from day to day. As an entrepreneur, Jeff has had great success in his own business – but at the same time has had to overcome some serious personal challenges as well.

The reader will certainly get to know Jeffery Combs quite well as he really does open himself up to the reader in his book. He is the president of Golden Masterminds Seminars, and does a great deal of coaching and public speaking these days. He is also the author of numerous inspirational and motivational books, including More Heart Than Talent, Psychologically Unemployable: Life on Your Terms! and several others.

I found this a very easy book to read. It is obvious from the very first page that Jeff Combs is truly a people person. He’s done a considerable amount of network marketing and direct sales and motivational speaking which has resulted in his developing a very personable style of writing. He offers examples and anecdotes from his own life, which gives the book a very readable and personal tone.

He speaks in a conversational tone – almost as though he and I are having a casual conversation. It’s much easier for me to learn from someone like this then it is for me to sit in a dry, overly academic atmosphere. People involved in direct sales will probably relate well to Mr. Combs’ delivery and style. 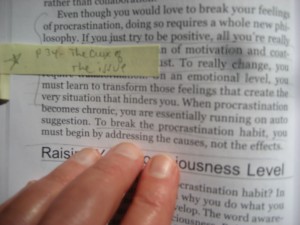 Having said that, I would still have like to have seen some footnotes or more sources cited for some of his discussion pertaining to brain chemistry, some statistics, or the methods he used to determine the various profiles or characteristics of procrastination types.

According to Jeff, there are six primary categories or classifications of procrastinator:

It is not for me to dissect each of these classifications in this review; however, I will say that I could not see myself fitting perfectly in one type or another. In fact, Jeff does say that we will probably find ourselves relating to one or more characteristics in several of the classifications.

This is certainly true for me. While I didn’t see much of myself in one or two particular types, I clearly saw myself leaning towards several tendencies grouped under other types.

There is no doubt that I share the characteristic of a few particular types of procrastinator over another. However, those tendencies are between me and the book! 🙂

I did have a couple of moments where I said, “Ahh! So that’s where that might stem from!”

Once the reader has become aware of his or her propensities, Jeff offers some activities and tips to begin overcoming them. 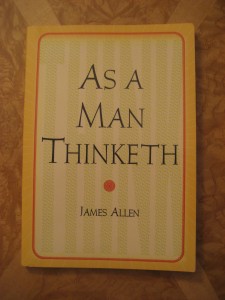 And here it is:
In all the self-development materials I have read (and believe me, I’ve read a few!), and all the teachings I have learned from and absorbed into my own life, to continue to identify myself as ANY type of procrastinator is contrary to how I want to see myself.

Then, I believe that my MIND will also see “producer,” and spur me toward production.

This may sound like splitting hairs to some, but it is quite significant to me.

Now, to Jeff’s credit, he uses these terms because he is quite frank about his own life and past struggles of overcoming obstacles such as addictions and procrastination. The term “recovering” is used in various 12-Step programs; so, it makes sense that he is comfortable using it in The Procrastination Cure.

But for me, I like to think of myself in different terms. Instead of being a “former chronic drinker” or “recovering alcoholic,” or “recovering addict,” I truly believe that the more powerful and positive image is that of “clear headed, happy and sober,” or to take it a step further, “clear-headed, whole, alive, healthy, and happy.”

While I know what works for me, you’ll need to choose whatever imagery works for you.

Results, ultimately are what count! Let me share with you something I’ve taken away and incorporated from the book…

I notice myself saying and thinking, “I should…” or “I ought to…” about various things. Now that I have become aware of this, I am better able to instantly catch myself and say, “No, Kath… Not ‘I should…’ I WILL and I AM doing this right now…” And, remarkably enough, I DO! I DO act on it – so I feel that this is a fairly decent step forward in my own productivity!

I’m of the opinion that this is a book with something to offer everyday people who want or need to address the habit of procrastination whether they are in business or not. I found myself thinking about someone who has mentioned issues with procrastination, and who really did fit one particular procrastinator type in the book. I thought to myself, “Wow, if (name) would read this, I’ll bet it would really help.” (Ahem… I wouldn’t dream of telling anyone about my thoughts on this unless it came up in natural conversation though and I was asked my opinion…) 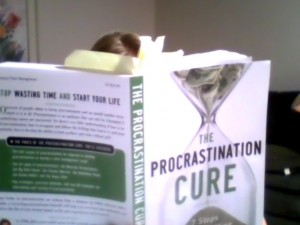 Again, The Procrastination Cure will probably be especially meaningful to those in sales positions since Jeff has such a long history in the field. And, even if one does NOT necessarily struggle with procrastination, the discussion of the various TYPES of procrastinator are interesting and telling.

As I mentioned earlier, I noticed certain tendencies in myself – not all related to procrastination either. Some were related to general ideas I have carried throughout my life. I found myself blinking a little on occasion and thinking, “Hmmm…He nailed THAT one right on the head!”

Jeffery Combs succeeds in writing and presenting the material in language the reader can understand, digest, and act on immediately. He does a nice job – and truly does open his whole life and heart out for the world to see, and to learn and benefit from.

To get your own copy of The Procrastination Cure by Jeffery Combs, simply CLICK HERE.