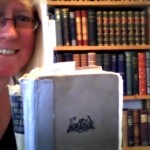 Back when I was a kid, my Dad read to me out of a well-worn poetry book called “The Best Loved Poems of the American People.” You can find that book almost anywhere – most used book stores have it. My Dad had received it as a birthday gift when he was in college.

For some reason, certain poems lured me in over and over again. Mostly they were inspiration poems. Or poems that told a story. Or poems with a lesson (For example: “A wise old owl lived in an oak. The more he saw, the less he spoke. The less he spoke, the more he heard. Why can’t we all be like that bird?” The author of that poem was Edward Hersey Richards.)

Many times over the years as I’ve worked at building my future in online business, I have found comfort, inspiration, and motivation in many of those old poems – written, undoubtedly by individuals who knew what they were talking about.

I remember and recite many of them often – especially in moments of doubt (yes, even I have been assailed by those moments! Especially when someone tells me I should get a “real job.”) 🙂

Anyway, when I was getting ready to leave the sixth grade for middle school, our elementary school had a little graduation ceremony.

How thrilled I was when I was chosen to be one of the readers! I had to choose a poem to read, and the one that resonated with me best then (and still does now), is the following inspirational poem by Edgar A. Guest. The poem is called, “It Couldn’t Be Done,” and I share it with you here now (To watch my video interpretation of this poem,  CLICK HERE for the Blog Entry that has the video):

Somebody said that it couldn’t be done,
But he with a chuckle replied
That “maybe it couldn’t,” but he would be one
Who wouldn’t say so till he’d tried.
So he buckled right in with the trace of a grin
On his face. If he worried he hid it.
He started to sing as he tackled the thing
That couldn’t be done, and he did it.

Somebody scoffed: “Oh, you’ll never do that;
At least no one ever has done it”;
But he took off his coat and he took off his hat,
And the first thing we knew he’d begun it.
With a lift of his chin and a bit of a grin,
Without any doubting or quiddit,
He started to sing as he tackled the thing
That couldn’t be done, and he did it.

Whenever you are doubting your abilities because someone tells you to stop dreaming about your goals  just remember and recite this poem to yourself over and over.

By the way: This is a special note for my readers who have been dreaming about or are otherwise interested in working from home or Internet Marketing Education: Just because you may not become a millionaire overnight – or even make your first sale for a long time doesn’t mean you shouldn’t continue to move towards your dreams of success. It won’t get done unless you work at it steadily (think about Thomas Edison and his thousands of attempts to create a working electric light bulb… Aren’t you glad he didn’t let anyone get in the way of his dream?)

Just remember to “start to sing as you tackle the thing that ‘cannot be done’ and you’ll do it!”