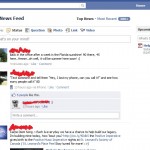 Even I have jumped on the Facebook and Twitter bandwagons. But the moment I did, one of the very first things that I noticed is how inappropriate I found some of the posts that I read.

Since I have a lot of years under my belt as a career coach and resume developer, I automatically imagined that anyone with any sense at all would know not to rant and rave on these social networking platforms.

Especially if they want to be taken seriously in the job force.

Sadly, this is not the case. Clearly, a good number of people have not been taking this seriously.

As I began developing “friends” on Facebook, for example, I accepted a few “friend requests” that seemed harmless and which might be helpful as I build my business.

Then, one day – to my horror – I noticed that some of these folks were posting things that would make the most open-minded people blush and cringe. I won’t go into what the postings were. But, I instantly went to my “friend list” and “unfriended” them.

I would be absolutely mortified to have a potential employer find filth, nonsense, and utter drivel on my Facebook news feed or my Facebook wall.

To me, it would feel as though the employer was walking into my home and seeing that the toilet hadn’t been cleaned for 2 weeks. This just wouldn’t work for me.

Then, there is the matter of what seems to be common among some individuals who may not yet have a lot of experience finding and keeping jobs. It amazes me that some of them appear to be completely unaware of how they are coming across.

When I see posts “IN ALL CAPITAL LETTERS BECAUSE THEY’RE JUST SO ANGRY AT SOMEONE WHO JUST INSULTED THEM” I just cringe.

To make matters worse, they actually use profanity – even though they thinly disguise it.

For example, what do you suppose they are actually saying when you read, “I am so effin excited about…” Or, “It’s so f-n cool!”

Personally, I would have a difficult time being convinced that these people would add value to my company. I certainly don’t see them adding any value online.

And, I honestly believe that if I had 2 potential candidates for a job – and these 2 candidates were 100% equally qualified – I would probably be inclined to base my decision on who behaves better online.

But that’s just me.

I want to write them a message: “What on earth is wrong with you? Don’t you know that the next time you apply for a job, you’re going to be grilled over what you’re putting on Facebook for the world to see?”

But I won’t tell them because they didn’t ask my opinion.

But, I really wish they would.

If you found this article helpful, would you please be so kind as to share it with your Facebook friends by clicking the “Like” Button here? Your employer will appreciate it (and so will I) Thanks! 🙂